And… let us know that all the loose ends, which cause all the vain mortal head trips where people are hallucinating under paranoiac delusions, must be left unto the edification of the Universal Mind. Only It can put the perfect Uni-helix together thru those of us who follow the main path. To receive a visualization of the main highway that leads all the people who get on it back into eternity, let us see the main spectrum of light simply as beta, alpha, and gamma rays. Let us visualize a chart using the three primary colors of red, blue and yellow. On our chart we make a straight yellow line, representing gamma rays and the main highway. Then we make another line in red that curves back and forth across the yellow line, representing beta rays and the yin forces of antithesis. And in the same way, we make a blue curved line that represents the alpha rays and the yang forces of thesis. In this, antithesis and thesis are relative to each other and keep zigzagging across the yellow line, trying to seat in the three-in-one trinity of PSI time-light energy force. A Cosmic Master is an adept with the ability to not let body desiring (body sensing) take his body vehicle on those zigzag trips. He is stationed in his Uni-auric center and sends his astral body out, so to speak, to gather all the information from the antithesis and thesis so that he can write the synthesis of their relative problems, in order that the people might know the truth and act according to it and be set free of their karmic attachment to matter. Then they can begin to complement each other in all that they do. (TTYOTW P.210)

Being a Cosmic Adept

In this you can see that it would be foolish for a Cosmic Adept to take physical sides with either side; because, if he did, he would be drawn into karma himself. And on the other hand, he knows that he was placed in charge of this Placentia project at its beginning and that he must be accountable to his space command and to the UM, taking the responsibility that what has happened here and what shall take place, is in a way, his own. He could have no guilt about decisions, for if he were to have such guilt, then he would have to believe that the Godhead would punish him for his failure; and in turn, that he would punish people and they would punish him. Were he to begin feeling guilty and take on a world savior complex, then he would be crucified because of their sins. And ‘sin’ is yet another one of those words people use that has no semantic meaning with the perfect Uni-helix. But the world would not be healed. The world is never healed until its key people fulfill the natural law. When they do, then it doesn’t matter, within reason, what the sheep do because they are delivered into a foolproof world social environment set up so they cannot possibly err. The Cosmic Master has common horse sense enough to lay all the ends that he cannot tie together into the edification of the UM. Only It can put our New World together by our tuning in and following Its explicit directions. A Cosmic Master does not depend upon himself. He is simply a child in the hands of God. If he begins to feel guilty, then he remembers one thing: that it’s not his trip, but God’s trip. So he lays the burden on God, and of course the Godhead has a real thing going in Its eternal Universe. And It surely doesn’t sweat, toil and bleed; but It corrects all erring at this time. (TTYOTW P.211) 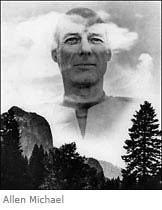 ETI space beings can relay these things to me that I write down from space ships because they can broadcast on the wavelengths of telepathy, in which there is no time delay. All I need do is to be able to balance with the yin and yang poles of this planet’s auric akashic records, the playback of which reflects all the bizarre trips going on here. The synthesis energies that ETI beings send to me cognite me into the planet’s akashic records to see and hear what really took place in history around important events. And they lead me in these writings to give the synthesis of past events as they apply to the here and now. It’s sort of like I’m not for or against any particular thing… only for that which is right on for everyone. I can take the important ideas everyone has expressed in words or in writing, see where they are coming from, and then – most important of all – put them back into the big jigsaw puzzle (the Uni-helix) so they fit into this World Master Plan. (UFO-ETI-WMP P.69)

Gabriel began to fully awaken to his channel while on healing retreats at Stewart Mineral Springs near Mount Shasta with the Clarity Breathwork community. It was 60 years after Allen Michael‘s Cosmic Initiation, 40 years after the birth of the One World Family Commune, and 20 years after the Harmonic Convergence. Gabriel was contacted on Mount Shasta by an Angelic ETI being revealed in the form of an angelic cloud. He has since been called thru dreams and revelations, and has answered by establishing his Ministry.
View all posts by Minister Gabriel →
This entry was posted in Uncategorized. Bookmark the permalink.