Tilting of Earth on it’s Axis 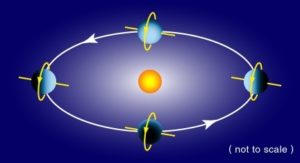 The following article by Dr. Michael Salla presents compelling evidence for the tilting of planet earth 90 degrees on it’s axis, just as channeled by Allen Michael in the Everlasting Gospel. I have compiled the relevant passages so we can round out the big picture of how and why this was done. Enjoy!

The entire outside of this planet has been constructed by Galactic Beings, using their mind-over-matter space technology to bring and support life here. Life was brought here or cloned in causation chambers aboard spaceships in numerous forms of DNA-RNA; such as seeds, bacteria, plants, animals and human bodies. Originally, this planet was in orbit far away from its present position, in the outer reaches of the solar system. It was selected and towed into its present orbit by galactic spaceships because it had huge polar ice caps. Moving it to its present position in relation to the sun allowed the creation of the special biosphere needed to sustain life on the outside surface. Once in position, the planet’s axis was rotated a quarter turn, melting the polar ice caps, creating oceans and mountains on the continents. Later it was rotated back to its present alignment to produce the years of changing seasons. (p.49 NWB Book 2)

The phenomenal glory of the Galactic Command Space Complex in orbit about this planet is that they are hooked directly into the Universal Mind thru their computerized system, and thus are directly led into first cause missions. They transcended from planets long ago and were given the great secrets of God’s Universe to carry out the first cause mission of our whole Galaxy The High Beings of the GCSC have led this earth dispensation from the time of Adam (Atomic Space Man incarnated into earth flesh). They colonized this planet with its root races long ago, when they shifted this planet a ninety degree turn of its axis to give it a new landscape job for this special earth project, which is in its fulfillment now. If this seems hard to believe, then ask yourself why there are regions of land that were part of the equatorial zone which are now frozen beneath the ice in the polar regions, and why the mass graveyards of prehistoric animals are preserved there. This planet went thru a great planned cataclysm at the time of Noah. Noah’s Ark was a great Mother Ship of the Galactic Command, assigned to the Archangel Michael, who sent here a detachment of the Galactic Command Space Complex, which comprises the main force of the UFO’s that will deliver the Holy People at this time according to prophecy. (p.111-2 TTYOTW)

The psychic heads in the USSR, who told about their mental impressions as to what caused the great explosion in the Tungas Pass in 1908, were right-on, in a way, in their idea that the sun was somehow involved. It was an explosion of the remains of a great spacecraft, left in orbit about this planet; and it did come from the sun in a way. That is, it came from one of the Galactic Worlds, called Altamedia, that orbits about the great Central Sun of our galaxy. It was the Mother Ship that GC beings used as the Ark when this planet was shifted on its axis, so that points on the equator went to the poles and the ice caps went to points on the equator. This was done to prepare this planet for this special project – to give it a new landscaping. The Mother Ship Ark was, of course, used to take previously colonized specimens of plant, insect, animal and human life off of the planet until the earth’s crust quieted down and the waters from the melting icecaps formed into oceans. This set off great volcanic action also, the results of which we see in the beautiful continents, with their mountain ranges, plains, rivers, lakes and oceans that were formed. It’s as if an abstract artist had poured out his colors on his canvas and moved it around to create a beautiful design. Before this planet was shifted, it was mainly land that looked somewhat like the moon, except it had lakes and vegetation. GC Beings had given many planets the same treatment, so they knew how to take a planet and transform it in such a way that it would become oceans and continents, instead of land with lakes that had nowhere to drain. This really is a super planet in comparison to most of the other ones in this solar system. (p.93 TTYOTW)

The people of the United Planets Organization, or Federation (the UPO) of this solar system had reached a grand state of socialism in their natural body and soul evolution. They were and are, still, in eternal forms. And the things being carried out on earth were not of their experiences at all. It was all Greek to 7th density people, and in their own way they did all they could to help earth people. The high beings of the Galactic Command are of the 12th density, and they have the main-line prophecies since they get their computations directly from the Universal Mind, which leads them as to the fulfilling of their assigned Placentia earth project. The UPO Beings are not tuned in to the greater demonstration now being brought into its fulfillment by Galactic Beings. The UPO still sends forth prophecy according to the cybernetics they get from this planet’s aura – prophecies of great calamity on the earth which they have no way of offsetting. For example, the UPO had only the stories we read in the Bible to tell earth people about such a fantastic, purposeful event as the shifting of this planet on its axis, at a right angle to its poles, where portions of the equator went to the poles and froze in the new accumulating ice cap and the ice of the poles went to the equator. This was all part of the re-landscaping of this planet for this dispensation. Nevertheless, we read the UPO reports of this event in Genesis about the flood and Noah’s Ark. This is the story they gave, yet the occult circles had the greater truths all along. Not only the Bible, but ice-age science as well speaks of this big flood. The dinosaurs that the GCSC put here had served their purpose in creating organic terra-firma and were pushed by the ice, moving on its elevations, into graveyards over the planet. And the crust of the earth was broken up to form the mountain ranges and continents as we know them now. All of this was done to give this planet a beautiful landscape job to prepare it for the fulfillment of this Kingdom of God mission. But the point is, look at the stories earth people were told about these events. The GCSC was not to reveal the truth until now. The whole idea in such a project as this is to keep the people seeking; and, in this way, they rise in consciousness to begin to correct error and remember who they are. The Truth can only come in its time, and when its time comes it cannot be stopped – and it fulfills itself completely. (p.252 TTYOTW)