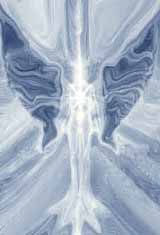 Gabriel began to fully awaken to his channel while on healing retreats at Stewart Mineral Springs near Mount Shasta with the Clarity Breathwork community. It was 60 years after Allen Michael‘s Cosmic Initiation, 40 years after the birth of the One World Family Commune, and 20 years after the Harmonic Convergence when Gabriel was contacted on Mount Shasta by an Angelic ETI being revealed thru the form of an angelic cloud. He has since been called in dreams and revelations as well, and has answered by establishing and sharing his ministry via this website and services across the greater state of Jefferson.

Rev. Gabe continues to move into his function here in service to humanity, sounding in a multitude of ways the call to all souls towards full rememberance of God-self. Enjoy attuning with me here and now to the miraculous Truth of our home in the Eternal Family of souls!

Gabriel (pronounced Gah-vry-el) is the archangel who quickens our weakness to strength and joins Michael in guiding us thru periods of great karmic cleansing (i.e. Sodom & Gomorrah, Atlantis and Lemuria, the Christ Demonstration and this ‘Time of Times’ and the end of time altogether). When Michael comes on the scene, it is said (in the Urantia Book) that Gabriel takes a supportive role, as herald to Michael as deliverer. It’s an arch-angelic dance of transmutation, redemption and fulfillment!

Angel Gabriel is often depicted with the ‘horn of annunciation,’ bringing revelations, messages and guidance during times of great spiritual transmutation. In earth history, Gabriel is known for bearing the news to Anna (the Teacher of Righteousness of the Essenes) that she would bear the incarnation of the Divine Mother (Mary) who would bear the incarnation of Christ (Yeshua). Gabriel guided all the ‘cosmonauts’ and ‘flash-ins’ that would incarnate during this ETI Christ demonstration. He appeared to father Joseph and the Essenes and directed them to flee to Egypt to protect the Christed One in his youth. And when Yeshua prayed and agonized to the point of sweating blood in the Garden of Gethsemane, before being taken in by authorities, the Archangel Gabriel came to strengthen him. And last but not least, from Gabriel, the Myrrh-bearing Women heard the joyous news of Christ’s Resurrection. Hallelujah! 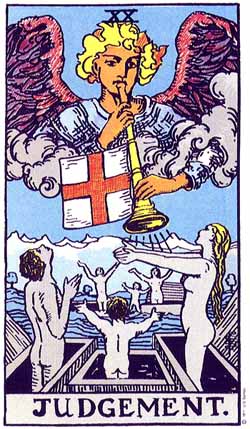 Gabriel, as the herald of the New Age, is pictured on the ‘Last Judgement’ Tarot card, where the souls of earth are called from the grave of mortal minded thinking with the horn of the ‘Red Cross’ gathering the ‘Salvation Army’ of the 144,000 even as the flood waters of the apocalypse-revelation abound. This is Last Call for souls during the harvest time.

“In a moment, in the twinkling of an eye, at the last trump; for the trumpet shall sound, and the dead shall be raised incorruptible, and we shall be changed. For this corruptible must put on incorruption and this mortal must put on immortality.” –1 Cor. 15:52-53

A note on “judgement”: Only God’s judgement is perfect, because it never condemns and always helps, loves and lifts. “If it is the judgement of the Holy-Spirit, it will be right, for judgement is His function.” (ACIM-Txt.12.VII.12.6). This is in alignment with the EG which reminds us that the judicial-penal system is a negative effect of a wrong cause. God’s first-cause always heals and rehabilitates and comes thru “our own conscience in God.”

Gabriel comes thru the lunar (Chandra), and especially the new Moon, and is associated thru reflection with the blue-green, gravity-tossed oceans of earth ‘change’. In the elementals, Gabriel is felt thru the devas of the white moth, the white dog, the lily, the mushroom kingdom and the weeping willow tree; and geo-magnetically thru pure silver and moon stone. Gabriel is sometimes considered the ‘dark angel’ on the left hand of God, operating more thru the emotional nature – music, the performing arts, karmic transmutations, and the emotional healing modalities. 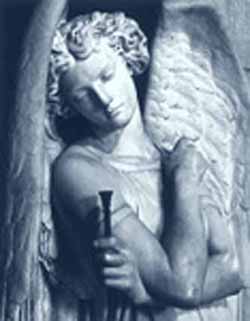 As with the Moon, everyone can and does (even if sub-consciously) channel Archangel Gabriel’s Truth-energies as they come thru in ESP-PSI messages and revelations helping the Son-Daughtership to awaken from It’s perceived spiritual slumber. In these times, Gabriel sounds the last trumpet call, making a stand now with the children of Is-real (is real people who have incarnated among all tribes on this healing planet), along with Michael & the 144,000, to birth a totally new age of absolute freedom, security and abundance.

“The trumpets of eternity resound throughout the stillness, yet disturb it not.”