Three Wishes of the Fisherman

From the Everlasting Gospel by Allen Michael 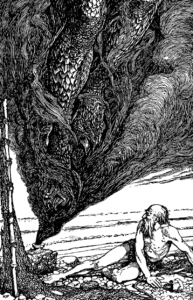 “I give the Jews the EG’s World Master Plan before calamity comes to them so that they can rise in support of it and be in the world harvest at the end of these days. The Zionist Jews do not have direct control any longer of the Gentile world banking system, but are now dependent upon it. It has spread out its branches over the world and has not brought forth good fruits to all people. It has gone into cyborgetry and is out of the hands of Jews, Catholics, Protestants, Masons and Communists. Nevertheless, only as long as usury money continues will Zionism continue, and usury money is ending. So the Jews must turn the last wish of the fisherman – who pulled the brazen vessel out of the sea in his net with the seal of King Solomon on it – into real down-to-earth, grass-roots practicalities. As the prophetic story from the Arabian Nights tells, the fisherman took the stopper out of the vessel and up rose a mighty genie in the form of an awesome black column of smoke, mushrooming into a great cloud between the land and sky. Everyone who is inspired with the great literature of the world knows that this story was telling of the time when, out of atoms (very small vessels), would come a power so staggering at the time, to the people who developed it, that the rest of the prophecy would be carefully reasoned out before they continued.

Now, why was King Solomon’s seal on the vessel? Had Judaism followed the wisdom of King Solomon? Or was it that the Jews’ Zionist world movement seized upon the first two wishes, in that it was they who, thru their CIA clandestine operations, turned the power into atomic bombs, vainly believing God had opened the vessel to them as part of the promise to the chosen people for world rulership?

It wasn’t the God of Israel (that which is real) who spoke to Moses on Mount Sinai, it was just space Lord Gods of the United Planets Organization – UPO – headquartered on Jupiter who gave Moses the Ten Commandments out of which came the mortal laws of men, which served as best they could during this long preliminary period until the one law of the Universal Godhead could be made truth all over the planet.

Atomic bombs were developed to destroy Communism, which the Uni-Godhead had brought forth thru ETI; not to rule the world, but to bring about the kind of world system in which people would be self-ruled – with everyone having absolute freedom, security and abundance. The Jews can rally with me and help bring this about.

The first wish to the genie was for power; and when the CIA at the time had no atomic bombs that would explode when dropped from the air, they had a vain thought to carry out a make-believe atomic bombing on Hiroshima and Nagasaki out of fear that the Red Army, which by then was defeating the German Army, would take all Europe. They were even more flabbergasted because the great explosions that did occur were not of their doing. Only they knew for sure that some kind of destiny had caused the explosions, which again they attributed to their God as though it was a sign of their final victory in the future with nuclear missiles.

Then came the second wish of the fisherman. Mankind had long suffered from hunger and disease, although atoms had already been healing all things with their mysterious rays, and the shortcomings of the people had been causing the degeneration in all things. Atomic rays are not mysterious at all to persons who know atoms as they know themselves. But, nevertheless, in the second wish, science would use atoms to heal and furnish more power, which would only lead to worse problems.

Earth science has only been passing thru matter atoms that have a cohesive substance in them which is neutral with gravity waves, and when their yin and yang poles are separated, naturally they will fly together again with the force of gravity and make a big explosion. But ETI scientists of the earth realms are on their way into energy atoms, which is the real power that animates life everywhere and brings perpetual motion generators that spin without an auxiliary power to turn them. The earth turns as a great armature in space, so why wouldn’t an armature turn anywhere by the same force that turns a planet and moves whole solar systems and galaxies?

The first two wishes of the Fisherman, who represents all humanity, were granted thru the genie of atomic power. If atomic weapons, in the wish for power, were sent to targets by every nation that had them, then we of the heavens could only say: “Those of the earth were really stupid and had no real spiritual intestinal fortitude to change the things that were wrong with their way of life so they could all have all that is wonderful.”

Even though ETI has direct control of all nuclear weapons, it has let a rather mad science and warlords follow the negative karmic road that has led to the present development of many nuclear warheads, enough to destroy all large cities and kill all the people on the planet fourteen times over. The biggest surprise ever is going to come to all people of the earth when they find out who and what the main source of the flying saucers is, what their first cause mission here is, and that they are not going to save any person who does not come into the EG‘s World Master Plan and begin to give and receive and bring about total sharing.

How about the USSR Judah and their nuclear weapons? Did they develop their nuclear weapons for the same purpose as those mentally subjugated under the cyborg beast (capitalism)? Thank heavens, they have the face of a man (Rev. 4:7) and have only developed their nuclear warheads to let warlords of the cyborg beast have full realization that if they tried to use nuclear weapons to destroy communism, they would get destroyed themselves. The warlords of cyborgetry live in the image of fantasy and, as we can see, the CIA is a kind of clandestine covert clan that believes God gave them nuclear might to save the world from antichrist, which they believe is Soviet Communism. They also believe that Soviet Communism is Gog’s army.

“Energy-thought atoms” have two poles – which are yin and yang, right and left, antithesis and thesis – governed by their neutron center, which is the synthesis between pro and con dialectical thought; and the opposites, which are right and left wings, will fight each other in a planned and controlled war (the last karmic cleansing war) to cast all people out of their midst who are negating the New Age energies. This is what their wars amount to. In the final results of warring, the wars are simply to gather the people out of society who will use weapons under orders to destroy the enemy. Of course, there is no enemy. Their ‘enemy’ is only the paranoia they feel from their own unstable emotions in their unclean aura, which in turn causes them to automatically select from the planet’s akashic records, or mental library, the ways they will act. Their actions can only be changed if they have a world plan to act within. A World Master Plan that is of Uni-natural causes.

As you have learned from these writings, ETI has control of all nuclear weapons and could easily explode them all right where they are. But even this would be disastrous. ETI space beings, who brought forth the knowledge of atomic fission and fusion thru their telepathic personnel here, did so for two reasons. One was to put a heavy weight on the end of earth people’s bad karma. ETI knew what earth science would do with such knowledge when being possessed with karma. It doesn’t seem to bother the masses of people much that they could all be given the baptism by fire, but this long period of potential nuclear suicide has surely caused the people in responsible positions regarding the firing of missiles to begin to reason about the validity of their act.

The second reason was that – thru atomic bomb and nuclear bomb tests, also controlled by ETI – enough atomic radiation has been put into the atmosphere to affect biological  changes over the planet and bring about the cleansing of degenerative effects. This also invigorates the people, rising in consciousness from incoming star energies, to astrally travel outside the earth’s aura to have visions of the wonderful things going on out there, and of how ETI is hooked into their head set.

The fishermen have a third wish left. What is it to be? Some wish Jesus would come. Some wish Emmanuel would come. Some wish a real world leader would come who could lead the people out of this world dilemma. And still others wish that beings from outer space would land and bring in a New Age. And then some look for messages from higher worlds that must know of Earth People’s plight.

These are not wishes – they are all real. So then the last wish of all people should be converted into Universal or Christ Consciousness, so they can give affirmations of truth that all civil social people of good will can act on in unison to establish our heaven on earth.”