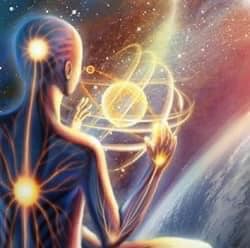 With Galactica’s arrival, new ETI holographic computer communicators will be delivered here. These new computers are crystal balls that come in different sizes according to need. They respond to psychic vibrations of mind force. Imagine a universal communicator that’s a wireless phone, TV, computer, Internet hookup all in one. You can speak to it, and the Uni Mind will speak to you. Through the New Jerusalem [mothership], we will all be connected to the Galactic Internet, the life-matrix of Universe itself, with 4-D instantaneous access to anywhere and anything in the Universe, with your mind in perfect telepathic synchronicity. Spirit God has brought us the world Internet to use as the electronic nervous system of the new autonomous world social organization, which is all a free flow of energy and not the static limitations of business as usual. (p.21)

Our computer technology will be programmed to compute an ideal schedule to keep the food, clothing, shelter, care, recreation, transportation, communication and energy flowing to everyone. Of course, we do not take orders from some hierarchy. We take advantage of the creative services provided by the New World Planning Commission and computer technology only as it applies to our own true needs and abilities. Aura photography will be developed in computer electronics so that people can see the Lightships of the Heavenly Abode and the aura of their soul body. Galactica has this already and will deliver all the needed ETI computers here for our autonomous, computerized New World Government. These computers are holographic and include guidance spoken directly by Spirit God’s Voice; they are crystal balls and come in a variety of sizes, from one inch to 30 feet in diameter, and will handle all data communications for individuals and groups. (p.105)