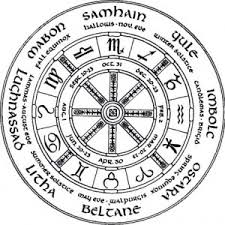 Samhain (pronounced SOW-in, the SOW rhyming with “cow”) comes from the Gaelic word samain derived from “Sam” – summer and “fuin” – end. It literally means Summer’s End. Traditionally the year is divided in half. The light half begins with Beltane and Samhain marks the beginning of the dark half and the Celtic new year (note it’s placement on top of the holiday wheel).

I consider it the most yin of the 8 Seasonal Holidays (see the Gauqualin plus zones in my article about Ritual for more on this), corresponding to the Waning Crescent Moon or Balsamic Moon, the semi-cardinal direction of the North-West and the time of day of 9 pm. The true midpoint is at 15 degrees of Scorpio, when the sun is halfway between Libra (Autumnal Equinox) and Capricorn (Winter Solstice), which is around November 7th.

Much has been obscured ‘behind the veil’ when the holy day was ‘Christianized’ with the creation of All Saints Day, a catch all honoring all the ‘hallowed’ saints and martyrs who don’t have their own holiday. Thus October 31 became All Hallows Eve and November 2 was designated All Souls’ Day, a day to honor the dead. Together, the three celebrations are called Hallowmas.

Today, Halloween has become one of the largest commercial holidays with people spending well over $7 billion annually on candy, costumes, accessories, decorations and pumpkins. The commercial excess includes endless amounts of toxic, GMO junk food, quasi-cathartic partying, mischief, vandalism and even violence. Indeed, the mainstream holiday has become devoid of meaning and, conversely, one of the most popular and entertaining of secular holidays. This sacred ritual time is further obscured by the convenient scheduling of elections, the change back to daylight savings time, and the world series during these days.

To Witches and Pagans, Samhain is a Festival for the ‘Dead’, and for many, it is the most important Sabbat (Holiday) of the year. The colors of this Sabbat are black and orange. Black to represent the time of darkness after the death of the God (who is represented by fire and the sun) during an earlier sabbat known as Lughnasadh, and the waning of light during the day. Orange represents the awaiting of the dawn during Yule (Dec. 21st to Jan. 1st) when the God is reborn.

This is the time when the ‘veils are thinnest’ and ancestral energies are most accessible, so it is traditional to invoke the guidance of loved ones from the other side. Since the veils are so thin, other beings also have more access for mischief making thru mediumship, etc. so the costume or mask was used as a way to become unrecognizable to any malevolent beings.

This is the time of the harvest Bonfire, a cleansing ritual offering of livestock, grain etc. to a community bonfire. Originally called a ‘bone fire’, this is where the animals that weren’t going to make it thru the winter were slaughtered and the remains and bones were burnt as an offering along with grain, etc. Each family would take a torch or burning ember at the end of the festival, return home and relight their hearth fire with the sacred flame of the bonfire to help protect the dwelling and it’s inhabitants during the coming winter. These fires were kept burning night and day during the next several months as it was believed that if a home lost it’s fire, tragedy and troubles would soon follow.

No doubt, this cross-quarter holy day has roots far beyond the Celtic traditions and much benefit and rememberance can be gleaned by tuning in at this time, especially by facing and meditating on the North-West at 9pm on November 7th. Blessed be!